Now I ask you what would be worse the real Tartan Army coming to your town getting drunk, messing up your neighbourhood, and singing songs all night? or a Zombie? I'd vote for the Zombie plus you can shoot'em in the head and get away with it!!! I wonder if a Zombie Scotland team would stand a better chance of making it through the qualifying round for a major tournament than the real one? (there wont even be Ireland to support next year either but that is of course another sad story).


Back to the Zombies . . . A short time back Stuart and I discovered we had a common interest in all things Zombie and started bouncing around some ideas of getting a little game set up that we could play at the club.

As with most ideas it was pretty much put on the back burner (more in the freezer to be honest) anyway a couple of weeks a go I stumbled upon a load of painted cops (from Police Academy).

As well as some rednecks and some vigilantes and decided it was time to put the idea in motion. 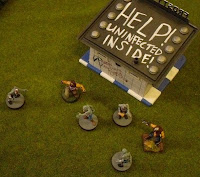 I picked up 40 warhammer Zombies from ebay already built at a nice price and have been converting them to look more modern. I have to say it's been a lot of fun especially as for a good while now I have been mostly painting naps.

Some OAP Zombies looking? well pretty much old and wrinkly! God bless them with their mint imperials and werther's originals. 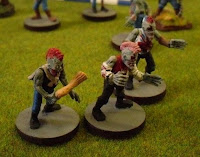 And proving that punk is most definitely not dead (at least not yet) are some super cool Zombie punk dudes with bright mohican's. I plan to use Army Painter on the figures to finish them off.

More pics to come when we get the game up and running!
Posted by Paulalba at 11:26