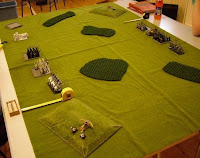 There was a bit of confusion about what was going to be played by our younger members with Stephen bringing his High Elf army for Warhammer Fantasy and Craig turning up with a Necron 40K army so a decision was made to split the High Elf army in 2 so they could have a game. You have to hand it to the youth of today they may not be that well organised but when it comes to the crunch they do come up with good ideas! 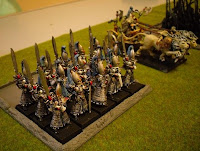 I don't know much about the Fantasy armies but they look really nice in the field.

Stephen brought along his Dragon and he's made a great job of it however he seems to have hit a bit of a brick wall of late with his painting. 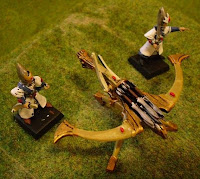 And his crossbows have turned out really well too. 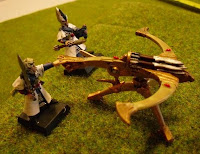 In the end it was a victory for Young Craig.