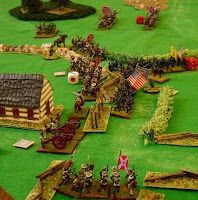 The bitter fighting for the 1st crossroads continued with David snr and myself having lots of admiration for the valiant Yankee's defending it. The only remaining Yankee units left on the table at that point of the game that were not in full flight!

However they had taken our country by force and we wanted it back! The time had come to roll for the chance to bring on our reserve brigades.

Would you believe it I was able to get my fresh brigade onto the table with my 1st attempt.

And as luck would have it so did my team mate David snr! Sadly young David (who had destroyed me the week before at Naps) and JP didn't manage it and as we bit our lips to try and hold back our laughter we set our new troops on the road and began advancing towards the enemy. Soon the enemy would feel the full force of the Southern war machine!

At long last! With some high dice rolls the stubborn Yankee's holding the last remaining crossroads were finally put to bed and the objective was clear for the taking. It has to be said my dice rolling on the day was pretty devastating and on various occasions JP called for my dice to be band from the club for all time! I remember when I bought my dice 1 of my wargaming friends said to me "£1 for 8 dice that's pretty steep, you can get a stack of dice for that!"
However what my friend didn't know was the wise old wizard (I think he works in a library in North Lanarkshire now?) that passed them onto me cast his hand across them uttering to me "these are special dice my young wargaming friend, use them wisely and each time you roll them during games of ACW you will shoot the **** out of your opponent". And so it came to pass!

Eventually young David managed to get the roll he needed to get his reserves onto the table and set off once again to do battle with his father.

And David snr began moving his 1st brigade up to the high ground to counter the oncoming Union brigade.

Meanwhile I hurried my troops forward into ready made defensive positions to await the inevitable Union onslaught.

With JP's 1st brigade dancing very close to the edge of the table he managed to rally them and bring them back into the fight but he still couldn't get that all important roll to get his second brigade to appear.