Young David's fresh troops streamed towards the battle with a new found enthusiasm. Could they force a draw?

What's this? Is that the hand of a special guest at the club? Could that be Peter Mandelsons £20,000 watch in view? No it's David snr working out how to block the Union advance.

Finally in the distance the Union 2nd reserve brigade could be seen entering the field with the remains of the 1st brigade out front shielding it from heavy confederate fire.

Time was running out as it was 4.20pm and we would soon have to put our wee men away.

By the last light of day young David set off in column in an attempt to outflank his father.

However as the light began to fade it was clear there would be no last gasp blow that could knock David snr from the field.

With the darkness creeping in fast David snr still held the 1st crossroad in numbers. There was a few brief exchanges of fire and both armies did a bit of damage but nothing decisive. 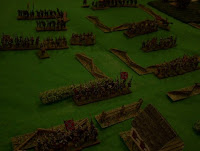 The day and the battle had come to an end and the 2nd crossroads was also still firmly held by our glorious Confederate troops and the way things stood the Union army would have needed a miracle to shift them from their dug in positions.
So a total victory for us Rebs in the end. Yeeeeeeee haaa! as the troops began to sing Dixie Land it was time to set off home for some KFC and to crack open the Kentucky bourbon and moonshine!
A really great game enjoyed by all.
I didn't think I would enjoy the ACW as much and I will definitely be giving it a lot more goes. Although it has to be said it does help when your dice come up triumph's 99% of the time! It made a huge difference from last weeks Naps when everything I rolled would have made a grown man cry!!
Terrain :
The clubs terrain set up by JP (great work John!)
Figures : From the collection of David P snr & jnr
Posted by Paulalba at 21:01