Last Saturday we organised our first game of 15mm ACW in our new home using the Johnny Reb II rules. I have steered away from ACW for a good while but recently decided to bite the bullet and learn the rules. JP set up a very nice scenario for us with four of us playing. Each of us would start the game with 1 brigade of equal size and each of us had to begin on a road at opposite sides of the table. JP (a veteran of Larkyburg) and David P jnr played the Yankees while David P snr and myself played the Rebs. In true Civil War style father would fight against son and uncle would fight against nephew!

We would also have 1 reserve brigade that we would have to roll 4, 5 or 6 to enter the game from round 5 onwards (I think it was round 5 is that right JP?). The objective of the game was to capture the 2 crossroads at the centre of the table and hold them till the end of the game to win. If you are familiar with the Johnny Reb rules you will know that the firepower can be devastating at times and when a unit breaks it can take pretty much all of the friendly units close by with it!

The Off : As you can imagine we all made a mad dash for the crossroads to take up the best positions and get our guns blazing. JP set his artillery up on the hill overlooking the crossroads and got the 1st shot off but thankfully didn't do much damage. I set my 1st unit up behind a fence opposite JP's advancing troops and positioned my guns aiming straight through the crossroads.
If he wanted the crossroads he was going to have to fight for it! 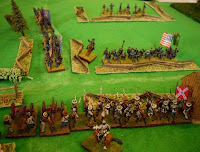 Things started to kick off in the centre of the little farmstead with JP baring down on my defensive position.

David snr pointed out to me that the Irish unit across the way were all raw recruits and that he had just finished them the night before and their varnish was barely dry. He estimated that going by the old wargamers law (sods law) I should concentrate my firepower on them as they would surely not stand and that's just what I did. 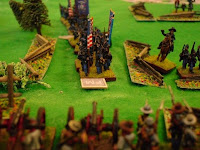 It must have been terrifying for those fresh young Yankee's as my artillery and muskets leveled down on them.

And sure enough David was right, before Paddy and Mick had a chance to tell 1 of their many jokes they were off and running.

A double 1 from JP and it had turned into the Great North Run! 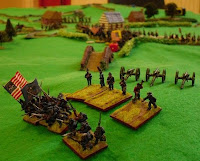 David snr had pretty much the same effect with his dice on the other Yankee brigade and a double 1 from young David and his troops were soon heading for the hills too. Darn Yankee's think they can come down to our Southern States pinching our corn bread, fried chicken and black eyed peas, stealing our cotton and trying to tell us how to live our lives! We were having none of it, up the rebels!

Pretty soon the only Yankee's left on the field were 2 units of young David's doggedly holding on to 1 of the crossroads.
However they were under pressure from 3 sides. Surely they couldn't hold out for much longer? You may have noticed that there are no charges going in? This was because we decided to keep the game simple as it was our 1st in a while, games can get blogged down with the charge sequence.