Relations between the Romans and the Celts had been pretty good for a change with the Celts picking up some of the Romans habits, they had begun drinking fine wine with their meals and had been getting into the Roman bath house fad in a big way and it really appeared they had began to warm to their new neighbours.

However the weather locally had been dismal of late and as fate would have it the heating system in the locals bath house had packed in leaving them with icy cold water in their tubs! A nasty rumour was spreading around town that the Romans pet elephant "Laxativ" had taken a dump in the heating system blocking up the pipes but when asked about it the Roman governor dismissed the rumour as CRAP! and refused to fix the problem! So that didn't help matters at all!) 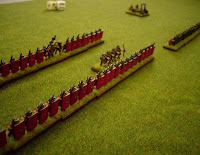 Anyway the Celts were pretty p*****d with the situation and with no Celtic plumbers back in those days (as we all know the Romans invented central heating. "I know I'm talking mince but just roll with it") things just went from bad to worse and what do us Celts do when faced with a problem? We start a fight! So David took to the field with his vastly increased Roman force (David has been working his way through the Warrior Miniatures Romans I got him for Christmas last year).

The Celtic Chief JP took to the field with his pretty cold hordes (they neglected to shave as the water was just too damn cold, yet another historical mystery solved!).

From the Celtic lines you can see Laxativ charging forward. 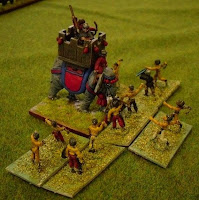 The Celts are not known as big animal lovers and the light troops quickly surround the giant. 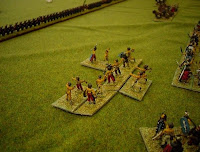 Poor Laxativ didn't stand a chance, pretty soon it was curtains for the unfortunate beast, you can guess what will be for dinner tonight!

The Celtic mass moves on itching for a fight.

The Celtic chariots head for the Roman lines. 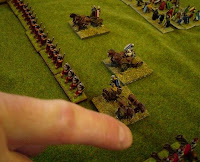 The Hand of God:
It could be you? Yeah right a 1 in 14 million chance (as Homer Simpson would say "I like those odds").

It looks like there will be a right old fight in the centre. 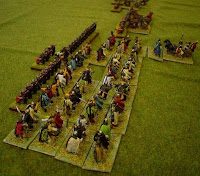 And there was, it was a close run thing but at the end of the day it was a Celtic victory and that plumbing would have to be fixed!

In the end the Roman governor had to concede defeat and accompanied his mounted plumbers to sort out the icy mess. Pretty soon the hot water was flowing again and order had been restored. It can't have been a pretty sight being knee deep in Laxativ's S***!

A wee note of appreciation: JP was working this Saturday, 1st in the morning and then again in the late afternoon and he took the time to make it over to the club as he does every week to take part in battle. It must be hard for him when he is champing at the bit to get a game in before heading back to work and we all start our "show and tell" with our newly painted or acquired Naps, Ancients, Zombies or whatever else we have discovered in the past couple of days, weeks, months and I know his meds he takes for the tourette's don't always work as well as they should!

JP is a real hardcore wargamer that will try any set of rules or period and clearly loves his wargaming and encourages everyone who he meets. So I just wanted to say thanks for showing us the ropes, helping out with the rules pretty much all the time and passing on your enthusiasm. It's very much appreciated!