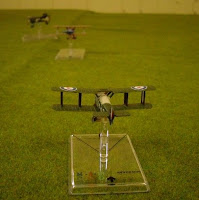 It was some time last year Chris brought along his Wings o War to the Motherwell club on a quiet night when we didn't really have much planned and it was an instant hit. 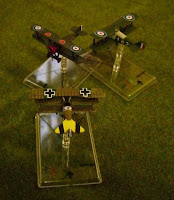 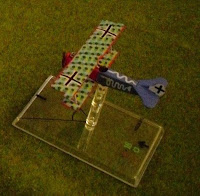 Robert who was also there the night Chris brought it in went out and bought considerably more planes than me as he is a big WW1 aircraft buff as did Billy and it has become a bit of a tradition now to get the Wings of War out if we finish a game of Naps, ACW or anything else for that matter early (meaning someone got trounced, this week it was Stuart and myself!) and every new player who tries it seems to love it. 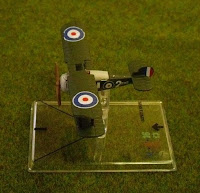 Each plane has a set of movement cards relating to the planes personal characteristics (the snipe here has loads of nifty moves). Also there is a damage deck of cards with random numbers up to 5 (with additional symbols like gun jams etc) each plane has a points value for punishment they can take and once reached your down. 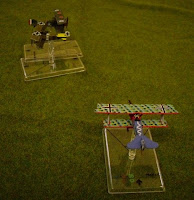 As Robert had just destroyed Stuart and myself at DBM he nominated to play a lone British pilot (Squadron Commander, Lord Flashheart?) while Stuart and myself played the vile hun attempting to avenge the deaths of our braviest and most blondest friends (on Tuesday night Robert shot down my wee fokker many times!). Great fun!
All in all a nice end to a good days gaming
Posted by Paulalba at 02:17