So the battle lines were drawn and with the initiative the French began to advance on both flanks. 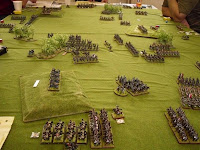 The Fighting Begins: It all kicked off when the leading French Cuirassiers went head long for the Russian Cuirassiers and the Prussian Dragoons did their best to support their comrades.

Over on the other side of the field in the blink of an eye a full Russian cavalry brigade disappeared from the field! (sorry Stuart). I had heard of this happening in battles before but had never seen it.

To be honest I almost missed the whole thing as I was taken a couple of pics at the other end of the table. 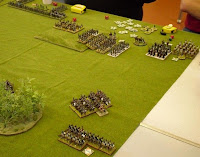 So 3 totally hellish rolls in succession and the Allied left flank looked very vulnerable to say the least and we had only been playing 40 minutes! I have to say that Von Hannah had predicted the whole sequence of events and had cautiously held his Prussian brigade back for their own good. (so much for our unwavering confidence in our Russian Allies!)

In the centre I decided to forget all the wise words past down to me by more experienced wargamers about softening up your opponent before attacking and not advancing on superior numbers and decided to put my brigade onto assault orders!

It was a day for really crazy dice rolls over on the other flank as both sides couldn't seem to get anywhere.
However the French infantry (bravely staying in column) and artillery were happily shooting lumps out of the Prussian Dragoons flank as they past by and still neither sides cavalry managed to break through.

Both regiments of French Cuirassiers turned out to be a bit of a flop on the day failing to charge home on numerous occasions.

With the rear regiment running away from a very weak Dragoon regiment.

In the centre my advance continued with my artillery taking a stream of casualties from the Young Guard and my Jager and Schutzen rolling quite a number of hits on young Davids other battalions.

It was make or break time for my newly finished battalions as they steadied themselves for the charge home. Would I win the day and put the young pretenders guard to flight or would the young upstart leave his uncle (who has given him loads of cool birthday and Christmas presents over the years) with egg on his face?
to be continued . . .
Posted by Paulalba at 12:37