The 2 John's, young Martin and another friend (sorry bud can't remember your name?) were fighting out a little Italy WW2 scenario. As I was involved in a DBM game I didn't get a real chance to follow the action so just a few pictures to show the gear.

My brothers favourite! A couple of tigers rumbling along the road. (The buildings are from Timecast painted up and based by Jon B, Jon has done a really sweet job on detailing the buildings as terrain) 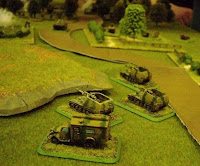 The centre of the battlefield in flames. 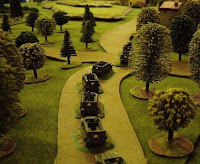 Some Allied half tracks edge through the woods. 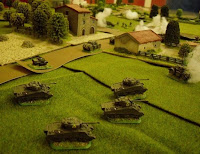 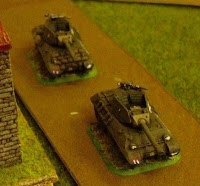 Achilles heading down a country road, loads of detail on the castings with the 50 cal. easy to make out. 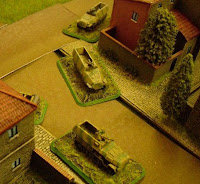 Some 251's taking a break in the street. 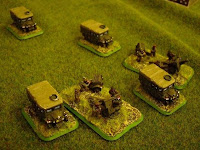 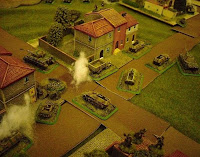 The 251's taking a shelling. Again looked like a really enjoyable game. I believe it got a little bogged down in the end with the rules needing a little tinkering.

Just a wee bit of fun by myself to see if I could recreate a 1944 Tigers in Normandy type picture. I look forward to seeing some different scenarios from the guys. They have some nice early war Germans.

I am kicking myself as I had a chance of picking up a neat little 10mm late war Russian army off ebay and missed the finish time! Ahhhhhhhhhh!!
Posted by Paulalba at 04:11