All across the field the fighting was heating up with the poor Prussian Dragoons being decimated and lifted from the table. 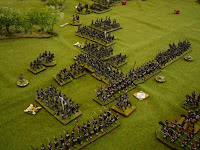 In the centre the charge was sounded and with some really crap dice rolls only 1 of my battalions went in.

Scary times for my brave Prussians and it looked like their goose was cooked.

Egg sur le face (as Del boy trotter would say) it was! My crisp new brigade bounced right off young Davids French battalions leaving me with a brigade test (which I failed).

With the brigade in full flight I only had one chance to save them as they rushed dangerously close to the tables edge!

Meanwhile over on the left (or right for the French) David P Snr after putting the Russian cavalry to flight pondered how to continue his advance. On seeing the Russians forming square the French infantry were put on the march and their guns brought within range.

Cautiously the French cavalry were held in reserve till the Russian squares were weakened.

Incredibly David rolled double 1's for both his horse and foot batteries leaving them out of ammo.

With such a large force facing Comrade Stuarti we couldn't really see what he could do to save himself?

Then out of the blue with his best Mexican accent it came
"I shall azzault z evil French!" Comrade Stuarti Neversaydieski decided he'd taken enough punishment from the French and was going to go down fighting.

Von Hannah who had been doing a bit of self preservation for most of the game (I think he was trying to finish the game without loosing a figures!) obviously inspired by the bravery radiating from his left was finally persuaded to go to the offensive to assist Comrade Neversaydieski.
to be continued . . .
Posted by Paulalba at 13:14