Storm in a Teacup part2 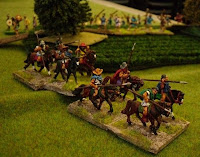 Roberts light cavalry heading out to scout round my flank. (I really dig those cowboy hats!)

I really wanted to have the guys in white to help me out on the flank but the rolls for our pips were no use. It was like that all game Robert rolled well for his and we rolled lower than average all freakin game! 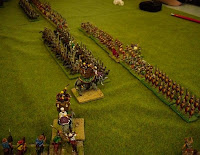 I managed to disengage 1 elephant to meet the growing threat to my flank but my rolling was p*** poor and I lost my 1st elephant within minutes!

Stuart was having as much luck as me and when it came to combat with the main army facing us we did no better.

Mid way through the game and we had been punished in so many areas that even when we rolled average dice Robert was still smashing us.

Roberts dice rolls were killing us and as it turns out he had bought them from the same wizard I got my ACW wonder dice from. It seemed that every roll was a 6, honest it did! 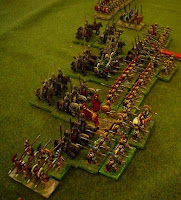 Our little battle had come to a critical point (that I don't really know about). Robert had reached or was reaching the number of elements he needed to kill to defeat us. The way I understand it Stuart had to roll at least 2's with the pip rolls for us to fight on.

And as luck would have it what did the big chap roll? 3 fluffing 1's! (games a bogey) It just goes to show how fortune can change and it's all on the luck of the dice.
So our fight had ended and Zorba's honour had been restored although I think she'll be grounded for the foreseeable future after her brothers finish with her! 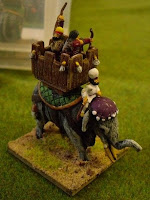 Anyway to distract you from the above massacre here is a pretty little elephant painted by Stuart.

I think I can still hear Robert laughing even now?

All in all a really fun little game with good people. In time hopefully I'll learn the positives and negatives of each troop type and build an army of my own.