And of course their Austrian cousins who also wiped the floor with my cavalry. However it was not all lost as the Hussars had to go back to their own lines and the Dragoons were not too close. Perhaps we would have time to execute our assault and knock the Austrians out of the battle before the Allied cavalry could come into play?

The target for the day, the Austrian 48 man unit in the centre of their line. If we could break this baby the rest would surely fold!

On the far right the 1st brigade was holding together and had managed to stop the Prussian advance with a double 6! (at which point I did my fancy double 6 dance). However his general survived unharmed. Grrr!

Everything was going to plan as our French battalions in the centre prepared for the final assault.

Young David shifted his Prussians around frantically to try and outflank my 1st brigade. 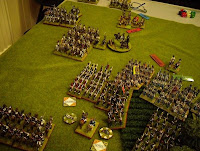 To David's delight his Cuirassiers did exactly what it says on the tin and sent both Austrian cavalry regiment off for an early bath which meant in time they would be able to threaten the rear of the Austrian lines. 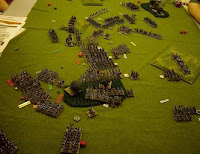 It was nail biting stuff as the battle hung in the balance. In the centre the main French thrust had fired off a volley last turn and 3 battalions had combined to executed the charge with the Austrians causing minimal damage the the battalions as they went in.

1 battalion failed to charge home but the other 2 went in and it felt like the glory days of 1805 and 1806 had returned,

Vive L'Empereur!
It was all down to the melee and the last roll of the dice with the French starting ahead. My 1st roll was poor but my second was good and it was now Roberts turn to see what would happen to his 48 man unit. If they failed the whole Allied centre could collapse.

And what did the big lad roll?

A puffing double 6!! not only that he also managed to kill my general!!!!!Ahhhhhhhhhhhhhhhhhhh!!!!!!!!! My French battalions just fell apart and over the course of the next round everything went into rewind. (you know for about 20 minutes there I actually thought we had them!)

To finish off a picture of my brother and nephew (the Davids) with the final positions at the end of the battle.

Every other game had finished while ours went right to the wire. It was another excellent game of Naps enjoyed by all and we had a good laugh too.

It just goes to show it ain't over till the fat lady sings! I now know why Earl Hickey made his list! In those 20 mins when I thought we had them and let my double 6 bring my guard down Karma had other ideas! 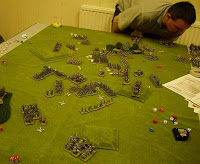 My brother David having a final shifty at Robert's very pretty Austrians. Maybe he wouldn't have noticed if we sneaked off with a battalion or 2?