The 1st part of our plan was for me to send out my cavalry to try and hold up (and possibly defeat young David's cavalry on the right). With the cavalry in combat it was time to put our plan into full swing.

Things were looking good as my Chasseur a Cheval gained some initial success on the right. 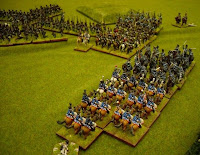 However it would be a hard fought cavalry battle.

With young David being traditionally cautious my 1st brigade swung right to engage his Prussians while making way for my French 2nd brigade.

The 1st brigade would have to be strong as they would take many casualties from the 2 Prussian Brigades but they stood firm and past morale test after morale test! 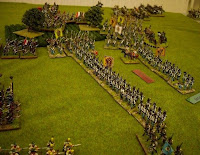 The Austrian 48 man battalion steadies itself for the coming attack and in the distance David's Infantry advance through the woods in coordination with my own attack and his Cuirassiers got stuck into Roberts cavalry.

David's cavalry had been taking heavy fire from Robert's gun battery so David sent his best troops to take them out at bayonet point.

A view from the Prussian lines at the massed French infantry approaching to the sound of the drums.

Sorry guys I forgot to resize this 1 so it might look a little oversized on your screen, but I think it still looks nice?

Young David decides it's time to take action and cautiously begins to send out his Prussian battalions in line to counter my advance.

Meanwhile out on the right disaster! The dice gods turned against me and despite some encouraging early roles and a 4 up on 1 melee I got hammered. (Both regiments disappeared in minutes!)

So here is a picture of the victorious Prussian Dragoons. They never perform that well for me?