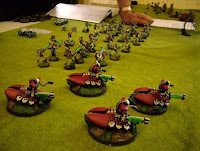 Every now and then someone comes along to the club with some figures or an army that you haven't seen painted up before and the WOW factor hits you, and this Saturday Stuart appeared with these babies! 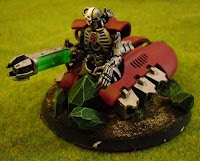 Even more unexpected as Stuart was going to be playing a game of Warhammer Fantasy and his opponent didn't appear. However as young Craig was without an opponent Stuart stepped in and nipped home to get his Necrons.

Look at this guy, big Arnie would be right at home amongst these lads! 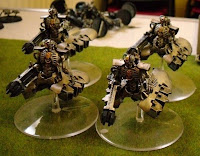 I knew Stuart had painted up some Necron Warriors for young Craig and this is how they turned out.

I guess these will be the foot soldiers of the army and Stuart has found a source for some excellent bases. Same place Stuart got his lava bases for his Demons

In mass they are 1 of the nicest 40K armies I have seen.

No idea what these little characters are but they are really nice. 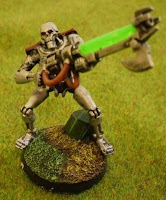 Sarah Connor watch out! They're organised and they're coming to get you!!