Young Charles and Stephen arranged a little game of Warhammer Fantasy on Saturday and very nice it was too! Unfortunately guys most of the pics were too dark, well you were at the dark side of the hall.

Young Stephen fielded his High Elf army (the good). As mentioned before Stephen has been struggling for the inspiration to finish his Elves of in his own words he has no time for painting. "Ah when I wir a lad I used to get up at 2am have hot gravel and water for breakfast and work down the mine all day and still have time at night to paint 200 figures and base them!". Yip the youth of today, to many distractions, Xbox and tinternet. 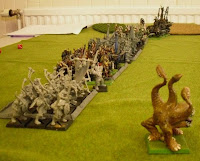 And young Charles fielded his Chaos Army (the bad) I think the Chaos Army is possibly my favourite of the Warhammer Fantasy range.
The cavalry figures (not shown) are some of the most incredible plastic sculpts I have ever seen. I now wish I had picked up a set from Central Wargaming at that good price when I had the chance.

Also in the Chaos army was this monstrousity (the ugly) I don't know Warhammer so well and have never played it but this has to be the ugliest looking figure in all the armies (but still a really interesting figure). No doubt it has some weird and wonderful powers that can slay nice figures at a glance?

Well I won't claim to know the outcome of the battle, the last point I seen the action the evil Chaos horde was advancing on the Elves flank.

There were some shouts, boo's and some name calling then the lads started to pack up their stuff and headed off to the local shop for snacks (which is the norm).
Unfortunately I have no idea who won so if you are reading this lads who did win? And get some more figures painted, buy some of that Army Painted stuff! JP, I know you will be reading this and thinking "he's one to talk about speed of painting".
Posted by Paulalba at 11:50