Friday I was working night shift but with the prospect of a game of Naps at the club the following afternoon I got myself home and had a wee 3hr nap (hence the name of this report, get it? well it's all I could think of!), got myself sorted out and ready for a days battling. It's at times like these that I wish I was a coffee drinker!

There were four of us playing in the game. In charge of the evil land grabbing Allied armies were Robert with his Austrian army and David who was in control of my Prussian Army, each had 2 brigades of infantry as well as a cavalry brigade. For a change I was playing the glorious French (who had tried for so many years to bring peace and freedom to the people of Europe) along with my brother David. I had 2 infantry and 1 light cavalry brigade and David had an infantry and a Cuirassier brigade.

A closeup of Robert's Austrian Cuirassiers and Dragoons out on the Allied right. Apologies for the picture qualities I was just to damn tired!

And another as they really are rather nice.

I've always been a big fan of the Austrian uniforms but painting all that white has put me off however I think the Hungarian infantry is a nice change with the sky blue trousers. 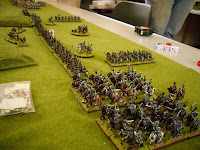 Out on the left of the Allied line young David had set up his cavalry to guard his flank.

A view from young David's position at our French Army preparing to advance.

A closeup of David's Cuirassiers that up to this point had not done well in many battles, would this be the day to change that? 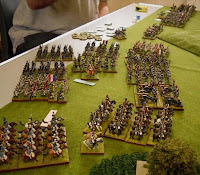 So everyone was set up, David and I had stepped out to discuss our cunning plan and left Robert and young David to sort theirs out. David and I decided to be aggressive and aim our main attack at the Austrians as we figured we could get enough firepower into play against their front battalions and that they would have problems manoeuvring the rear battalions (a kind of bottleneck) we felt we could combine an assault from my second brigade with Davids brigade and with his Cuirassiers hopefully beating off the Austrian cavalry to put added pressure on Roberts Austrian infantry. What's this, tactics? never heard of them?