Wolves in the Snow

I know technically there is no snow in these pictures but there was a hell of a lot of it outside. Besides we are wargamers so try and use your imagination! 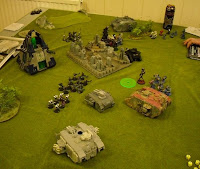 Well it was great to see the youngsters made it along to the club despite the fields of snow. Even more impressive considering some of them come from places were salt hasn't been invented yet! 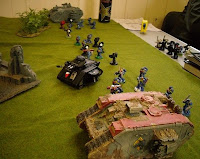 So the battle of the day was a very nice looking 40K battle with Space Wolves, Black Templars and Ultramarines up against the mighty Necrons.

Some beautiful looking kit on display, take a look at this baby! Space Wolves Rock Grrr!!!!!

Not sure how this 1 was played out as I had just finished night shift and was bogged down in a bloody ACW battle but it looked the business!

Young Craig had his mad looking Tardis type thing (that I believe is pretty indestructible) but Young Thomas and Martin had some powerful Imperial Armour on the table.

Some flying Necron dudes. Apologies for the picture quality (for some reason each time I take pictures of Craig's Necrons barely a single closeup comes out clear?) I put it down to fear as they do look terrifying!

To finish off here is 1 for the future, I look forward to seeing it finished off. No pressure Jon but pull the finger out and finish it ;-)