The second DBM battle on the go on Saturday was the Sassanids controlled by myself and a Greek army controlled by Robert. It was a replay of a game a few weeks prior with the addition of some rules we had overlooked. 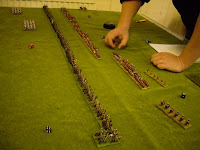 I already new I would be up against it as the Sassanids last time were well and truly humped but I wanted to try it out with the exact same army as last time to see if there would be any change in the outcome. And the answer was a big fat NO! 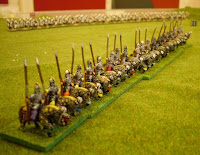 Despite looking like a rather taste army the Sassanids don't appear to be a good army to fight massed spears. 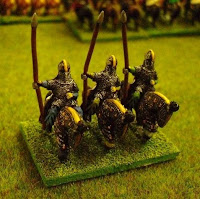 I'm new to DBM and it is well worth getting beat to see the deficiency's of each troop type as well as their positive aspects.

The little white sheeted dudes doing what they do best. Making up the numbers!


Lesson 1 : I now know what the point of the little white dudes are (and it's not just to get massacred) they increase your numbers in each unit so you can take more casualties.

Lesson 2 : Elephants although pretty have their time and place and it is not fighting Greek spears and pikes!

Lesson 3 : I need to build a couple of DBM armies of my own that have different abilities that can fight different opponents.
Lesson 4 : Greeks are pretty tough opponents especially with superior troops spread amongst them.

Robert and I managed to squeeze in 2 games on the Saturday afternoon. The 1st was a crushing defeat however the 2nd I decided to ditch the elephants and set out a bit better. and used the little white dudes properly. 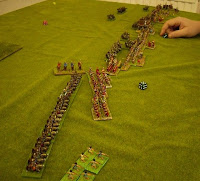 However although I wasn't getting massacred in droves neither could I make the breakthrough.
The Greeks were just too damn strong and even when I was rolling 6's my opponent rolled just enough to save them or the superior troop factor would save them. In the same vain my cavalry would flee then return to the battle and it took a long time for Robert to kill enough of my guys for the game to be over.

In the end all I was killing was the Greek skirmishers.

So 2 defeats on the trot but I feel I learnt a lot and would like to learn more about the flank march that can get the cavalry behind the Greek troops.