The big dudes as would be expected got stuck in right away.

Taking the fight to the little chaps.

However the miniature vikings were more than a match for their overgrown opponents.

Once they had taking care of this big thug victory was within their grasp. 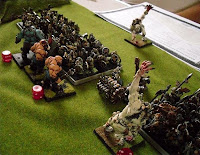 Despite the best efforts of the big bungling monstrosities the Dwarfs won the day, a true David and Goliath encounter!