Well a big surprise this week as both Des and Van der Hannah were free to arrange a large game on Saturday. The Battle of the Boyne was the chosen re-fight for the day with Des (King James) making his claim for the English, Irish and Scottish thrones and Van der Hannah (King William) deposing him.

Des raided his loft once more and made the not so short trip from the mountains down to join us. Great commitment to the club Des!

Each time I hear Des is going to be joining us I start to wonder what little gems he will be bringing with him. This time he managed to find loads of figures I have never ever seen before and amongst them these old Minifigs painted and based to a very nice standard. How long ago did you buy these Des and is that enamel paint by any chance? 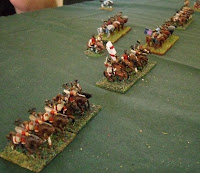 More figures I have never seen before at shows or online. By the positions of the sword arm they look to be tabletop figures? 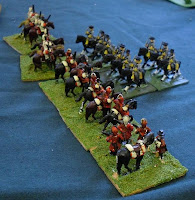 The Jacobite cavalry head out to meet their enemy. Very nice looking figures

A solid looking line for a small cavalry unit to be attacking?

The battle lines are drawn and a fierce battle looks on the cards.

Some really colourful uniforms from the period. Would these be the Dutch by any chance?

I the end the battle followed the historical outcome with King James being defeated.

What I would like to know is just what else does Des have hidden away in his loft? Only time will tell!


figures and terrain
All from Des's collection
Posted by Paulalba at 00:49