This will be the last club update for a while as our holidays begin but hopefully there will be plenty of newly painted figures on show at the club after our break.

This was a big battle between Steven (good guys) and Stuart (big bad guys).

Stuart has 2 of the coolest looking fantasy armies I have seen. (These guys and his demons) I think he also has a skeleton army? but we haven't seen it at the club for a long time. 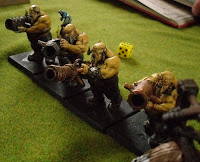 Some not so jolly green giants.

Steven has taken a long break from painting his Elves (I think he said his dog had eaten his paint brush or something like that?) but he still uses them regularly and that's the main thing!

Don't fancy meeting these guys on a dark night in Carluke. Although I have seen a few women roaming around the shire lately that don't look that much different!

A cool looking new addition to Stuarts army pulling a cauldron behind him. Look forward to seeing this 1 finished

Anyway that's us for a while so everyone have a great summer break and hopefully see you all fit and well ready to do battle in September!!!

Maybe bump into some of you at Claymore in August?
Posted by Paulalba at 12:03