Let there be light!

Now here is dedication for you! Last week at the club we were chatting about the up coming Wappenshaw show and basically we were all going. So it looked like the club would be off on Saturday 19th. Well Stuart is surprised us all with his commitment to the club as he not only was going to be attending Wappenshaw (straight in the door at 10am) he had also arranged a game with young Stephen for 12pm. Pretty impressive stuff I am sure you will agree. I only seen Stuart for a second, at least I think it was Stuart? (it was hard to tell as my vision was blurred as he was moving so fast darting from stand to stand picking up what bargains he could before he had make his speedy exit). Anyway the gist of it is Stuart inspired us and we all pretty much made it back to Law for a game or 2 and it turned out to be a great day! 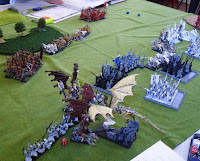 Stuart's evil beast's took on young Stephens forces of good and it looked to be a very hard fought game.

These are my personal favourite out of Stuarts Evil army. Fantastic paint job!!!

Although this is a duff photo (usually destined for the bin) I kept it as I think it worked out pretty well with the forces of good getting some extra help from a divine light cast from the heavens.

It even looks like some of the winged demons are trying to protect their eyes from the light!

I believe Stuart had to convert these figures?

I can remember him asking us a few weeks ago if we had and spare wings!!! Strangely enough none of us had any so Stuart had to find another solution and where ever he got these ones they do the job. It would be good to hear how you did your conversions Stuart and what wings you used!

Anyway it was a pretty mad battle that went on for quite some time and I think in the end they called it a draw!