Well here we go again with another project for the club but I guess it was just a matter of time! Another good turnout for the club this weekend with a few being unable to attend we still managed to get 3 good sized games on the go and a new member to boot, a very big welcome to young Kyle (maybe we will be able to tempt your dad along sometime too???)

The lads at the club (and also Motherwell club) have been playing ACW in 15mm with the JRII rules for a good few years now and when John M and John B started coming along to the club with their 10mm ACW we all started looking at them with the sparkling eyes of a little kitten checking out goldfish swimming around their round bowl. Very interested and wanting to get our paws on them but not quite sure if we wanted to get dripping wet

Well the inevitable has happened, John M and JP have been discussing the basing of the 10mm for JRII (results shown left) and have done some games both at the club and up in a damp cave somewhere between Larkhall and Strathaven Electricity there is not but experimental wargamers there are by the shed load!!!!

And now we have all taken the plunge! 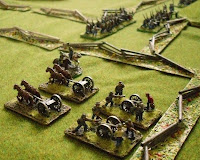 As well as John M's Confederate units well on the way to being rebased he has a Union brigade on the go too.

A wee closeup of some of John M's Rebel gunners

JP picked up the Pendraken Union army pack and is bashing his way through them at lightning speed. JP style

JP's Union battery well on the way to being finished

David P and myself will be picking up both Confederate and Union army packs this weekend at Wappenshaw!

so hopefully we will have some of our own troops on the table soon. 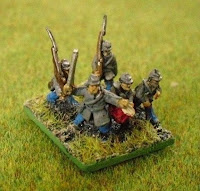 David C has also shown an interest in the 10mm ACW (Pendraken 10mm ACW by John M shown left) so we should be able to rustle up some pretty big battles soon enough. We may even start some of those campaigns that are often talked about! Who knows?
Posted by Paulalba at 07:51