Silently from the darkened skies they fell threatening the very heart of the Imperium . . .

The Tyranid invasion had begun . . .

. . . Sparked into life by the body heat of any creature unfortunate enough to pass by their resting place

Terror took hold with only the Space Marine chapters standing in the way of humanoid annihilation!

The Citadel standing proud as a hope to mankind.

The walls are breached

Who will save us now? 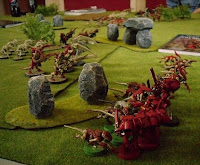 
A very nice looking game (the best looking 1 of the day?) from the younger lads this week. A mass of Space Marines trying to hold out as long as possible against the Tyranid infestation.

Figures
From the collections of Charles, David, Martin and Steven
Terrain
CWClub Terrain
Posted by Paulalba at 07:59