The Marshall announced last week that he thought it was about time he tried a Warhammer Fantasy battle again, just to see how the rules had changed over the years and the effect they would have on his Empire army.

I remembered him mentioning that he had played it a great deal when his son and heir was still a lad but I thought all the stuff was well gone.

So in comes JM with a really excellent looking Empire army (is that right?). I have always been a sucker for knights and crossbows etc and these are really cool.

Young Jonathan fielded his High Elves for the encounter and it would appear the years have not been kind to the Empire army.

Look at these, they are absolutely lovely.

It's always good to see what people have hidden away in their cupboards and lofts! 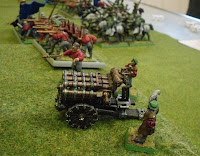 Even young Martin had a go. The Marshall pre-warned me that he didn't want to see that his lad was a much better player than him plastered over the club blog! (as if I would!). However what I will say is he is much jammier than his dad!!! Obviously he is still on that youthful crest of a wave when every other roll is a 6! 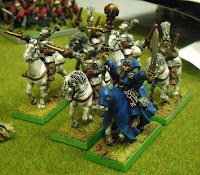 My favourite in the army. I have no idea who this guy is but he looks really cool. So the Marshall recons he would need a dragon and some other magical type things (not really sure as I have no idea on fantasy) for it to stand any chance against the armies doing the rounds at the moment.

So by my reckoning we now have 6 Fantasy Warhammer players around the club with a good few armies and at least 1 more getting put together. The Bugster and Jonathan have High Elves (and Jonathan has started Skaven?), Stuart has Daemons (and I think Tomb Skeleton type guys), JP has Vampire counts (and Chaos?) and the Marshall has these guys. I think the club also has an Ogre/Orc army? So quite a collection all in!
Posted by Paulalba at 07:31