To get you in the mood here are some pictures from the games played on the last Saturday of 2010.

As mentioned before Martin and David fought out a Lord of the Rings battle.

And John, M, David P and JP fought out an ACW in 15mm battle. 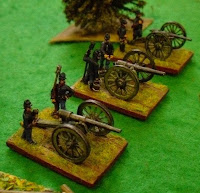 Now I was present that last Saturday and I listened to John M and David P extracting the Michael from JP all game and watched JP's Rebel artillery take a pounding and to me it looked as though the Union forces were dominating the battlefield so when I left early I naturally thought that Johnny Reb took a pasting.


Apparently not so as after talking with David on the phone it appears that JP's armies broke the Union centre and a southern victory was declared!!!

So I stand shocked, amazed and impressed!!!
Anyway if you have any thought on a game for Saturday email, pick up the phone or let out a shout. I will be down Saturday and so will David and David P jnr.
Posted by Paulalba at 01:57