So we had a great turn out on Saturday for the 1st club day of 2011. We had 4 games on the go with 9 players and 3 guests (I was a guest as I had just received a massive box of figures in the post from a swap, Whaaahooo!!! and wanted to trawl through it). Anyway back to the Action.

Now this is 1 for the watching as Simon and Jonathan have both embarked on new 40K armies (Simon is collecting Salamanders and Jonathan is going for Space Wolves). So I am really looking forward to seeing their armies take shape. 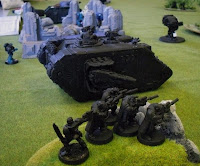 It's good to see some more 40K action at the club. This is the 1st of Jonathan's wolves primed ready for painting. I think the space wolves are 1 of the coolest chapters but also have 1 of the trickiest paint schemes. Jonathan I wish you well young wolf warrior!

These are some mighting machines, I was standing a little too close and I swear I could feel the engine heat off them! Honest ;-)

Looks like the Salamanders are taking the fight to the wolves. Some terminators advance on Jonathan's Land Raider with covering fire from their own big beast.

And in they go ready for the kill.
Again I have no idea who won?
Posted by Paulalba at 20:15