1st post of the new year and some pictures I didn't get the chance to post last year.

Young Martin and David put on another excellent looking Lord of the Rings game using the latest Return of the King rule set.

Sorry I don't have the time for small stories at the moment so mostly I'll let the figures tell the story. 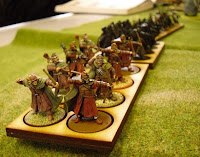 Rohan archers raining death down on the evil hordes. 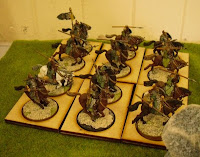 Riding out to meet the approaching threat.

A big bad beastie that will need to be taken down before it kicks the s**t out of the Rohan foot soldiers. 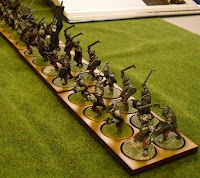 These look like mean sons of (well nothing really, sons of the earth maybe?). I still think they are very misunderstood bunch and are pretty kind hearted deep down!

The main fighting is in the centre.

I think the Riders of Rohan are getting the upper hand?

And as usual I have no idea who won?