Another cool looking 15mm ACW game on the go this week.

David P and DC played the Rebs and they were in attack.

John M was the Union awaiting the grey tide.

And here the come filled to the brim with moonshine. 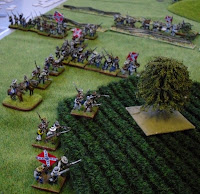 And the Union artillery unlimbered and ready to rock.

Unfortunately John M's rolling wasn't taking the numbers off the Union ranks as he would have hoped.

The Union held their line doggedly.

However in the end the Rebels force was just too great and they took the field.
Posted by Paulalba at 20:03