Again sorry for the hellish pictures but you get the idea of what was going on. Panzer IV from Esci with Eduard turret skirt and SHQ tanker, German figures from Battlefront

Young David set up a 20mm WW2 battle for Normandy 1944. I think these Cromwells are from Hat (fast builds?)

David was the Allies and Martin the Germans.

The allied infantry advance with the cover of a sherman firefly. The Firefly is from Milicast 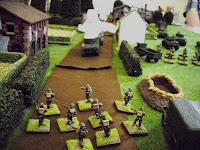 The hidden German defenders begin to take a heavy toll on the allied advance.

This is a collection David P, David P jnr and myself have been building over the years. Figures are from SHQ and MLR, Vehicle from Matchbox

British infantry looking pretty vulnerable as they move along an open lane in the bocage. 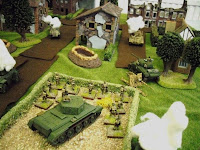 A burning inferno, The lads nipped out to boots and bought some cotton wool to use as smoke (class). 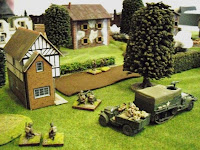 British medium weapons crews and vehicles using buildings and trees as cover. Vehicles this time from Cromwell Models and Hasagawa
Posted by Paulalba at 00:26