The club opened up for business after the September break was a healthy turn out and some cracking games and figures on show.

David P, John M and JP set up a fine looking DBM game. John M is dipping his toe in the water of 15mm DBM so we look forward to seeing a nice army from him in the near future. 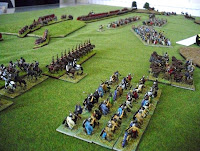 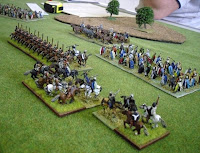 The guys haven't been doing the army points system for their troops yet so it was just a case of put on the table what you have painted so the odds were stacked against JP who as usual took it in his stride.

JP managed to put up a brave fight against a very large enemy force.

The game had the most 6's rolled I have ever seen (JP's dice) with David rolling nine 6's out of eleven roles at 1 point!!!! With JP rolling his fair share too.

However it was a victory for David and John.

At critical times in the game JP 's large dice rolls deserted him sending his units into chaos (impetuous troops I think it was?) and his army was eventually smashed against the solid walls of the Roman meat grinder! All the guys seemed to enjoy the battle.

Tune in next time for more excited battles down at the CWC . . .
Posted by Paulalba at 01:47