Charles, Martin and David P (jnr) fought out a 40k skirmish on Saturday with some nice troops on show.

Charles fielded his Imperial Guard against a much larger force.

Small in number but they put up a brave fight. 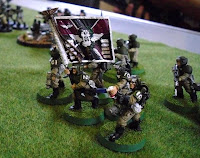 A nicely painted command set by Charles (maybe you can give your dad some painting pointers?). 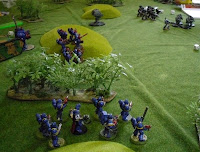 The guys parked their game in the darkest area of the table so not many photo's came out that well.

The Ultramarine force. Maybe you could finish off that base David?

Some hand to hand combat. 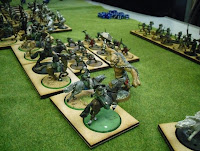 The lads had enough time to have a wee game of Lord of the Rings, cool!

Likewise Martin, maybe you could finish off your bases :-)
Posted by Paulalba at 01:50