Again sorry for the pish foties (these are probably the worst)

Jon B and myself had a nice Naps game on Saturday to have another go of the rules as Jon familiarises himself with the GdeB rules.

I was assaulting with my Russians and Prussians 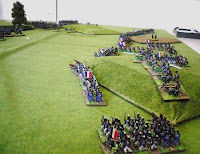 And Jon was the evil Frenchies! We gave Jon 2 batteries of 12lb artillery (1 a guard battery) to make things really interesting and Jon also had 2 regiments of cavalry that would appear at some point rolling for where they would appear.

I set up pretty badly (as per usual) and set about advancing on the French lines.

And Jon shot the s*** out of my battalions as they approached. 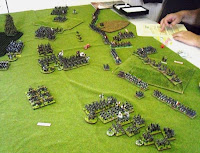 This is the 1st time we have had a full guard brigade in battle and they are pretty effective. 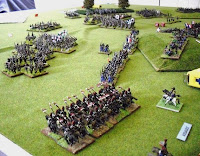 Jon borrowed a couple of my dice and they must have been my 2 weighted dice as they never really rolled below a eight all game!

I was just off night shift but we muddled through and it was a fun wee game.

I would think Jon probably held the day with some of my battalions pretty much churned up. A typical 1813 battle with the Allies thinking they had the beating of the Frenchies only to get a bloody nose!
A big thanks to JP for bringing his Frenchies along as an after thought or it would have been Russians against Prussians. I'm looking forward to seeing Jon's British brigade take shape so we can get some Waterloo games on the go!
Posted by Paulalba at 00:12