Last week work wise was a killer for myself with a whole load of nights straight and I didn't get the chance to arrange a game for Saturday. As luck would have it my nephew David was at a loose end without anyone to play either so we agreed on a wee game of Naps.

We decided not to use any cavalry just to keep it simple and have our forces pretty much even with both of us going for it. As luck would have it just as we were setting up John M and his lad Martin popped in and joined us for the fight. The boys being young and full of fighting spirit decided they would attack leaving us old guys to sit on our portly behinds and wait for the assault. Some of the French force decided not to make the trip from Coulter to Law so a couple of battalions of Prussians joined them on the field of battle.

I took control of my Prussian brigade

. . . you would think I would know what I was doing with them by now!

As you will see from this picture I clearly don't! Marching them in column, opening their flank to the advancing French onslaught. 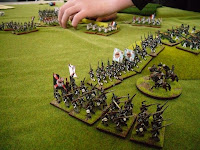 I very generously past my newly finished Old Glory Russians on to John M for their 1st battle on club soil. I was like an expectant father, how would they deal with the pressure 1st time out? Only time would tell!!

However I had confidence in John as he is very good at pushing wee men around a table.

And he did have these babies pointed at the enemy. Pretty soon the Frenchies would be picking lead out of their teeth! 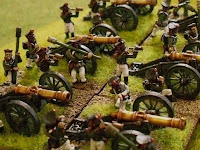 For a man who claims to have no interest in Napoleonics what so ever John seemed to be having a whole lot of fun with his wee Russian men! Just give it time and I am sure we will see an army of some German state allied to Napoleon painted by john in this very blog soon enough, watch this space!

John employed some mind games over young Martin sending out a soul Russian battalion up the right to engage the flank of the oncoming French. 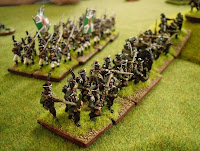 Here John! the guys with the yellow pom poms are meant to go at the other side of the battalion. What were you thinking man? You could have gotten your troops all messed up in the head!

Anyway my Johnny Reb flashbacks meant that David caught my battalion in the flank but thankfully he rolled low and I rolled high and they retreated. After being followed up by his troops I managed to get my guns limbered and out of harms way.

Out of shot on the left I managed to duff up his advancing columns and turn in time to start shooting lumps out of the now unformed French battalion.

And as young David charged in with his 2 battalions in the centre his jammy uncle (me) rolled a double 6!!! faltering one of the units and after a melee with the other was able to reinforce with the battalion in column at right!

I would like to point out that I am in no way Anti-French! Some of my best friends are French, well when I say some I mean 1. Actually come to think of it I don't know any French people but my wife has a friend who lives in France, or is it Belgium? No matter I'm sure on the whole the French people are lovely and they do make some mighty fine cheese and wine!

Right enough of my ramblings back to thrashing the garlic eaters . . . 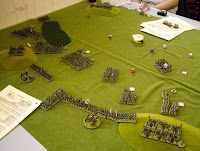 In the Allied centre young Martin for some reason marched his battalions straight at his dads 6 gun battery and with a couple of low rolls to start with John started rolling 11's. As you would guess the French attack came to a complete halt! 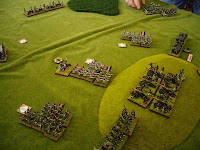 So basically that was that, young Martins brigade was massacred and my high dice all game (along with my magnificent tactical mind ;-) put pay to young David's brigade.

A victory for the Allies and more importantly a glorious start to my new Russians battlefield career. We had a great laugh and the boys were good sports with not a tear shed. When John and I were getting all worked up about our double 6's and victory the boys were cheerfully discussing next weeks Lord of the Rings game they will be having and consul games. The boys have got their priorities right!

A big thanks to Robert T who dropped by on Saturday and ended up helping us out with the rules!