Again I didn't get a chance to pay much attention to this game so here are some pretty pictures of the combatants. 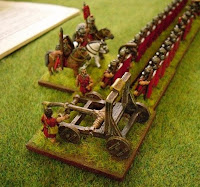 A Roman stone thrower type thing. I can't be assed to look up the spelling so I will type it how it sounds TREE-BUSH-EEEE!l How was that :-)

Some Romans and Sacinid cavalry mixing it up.

Some big efalumps rumbling around.

David's extra Romans that I convinced him to buy at Kirriemuir, Bargain!
Posted by Paulalba at 02:20