25mm to be Exact!
or ar they 28mm? I don't know, anyway they look Greeeeeeeat! 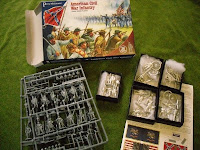 As I mentioned last week a few of us at the club had taken an interest in the 25/28mm Perry ACW figures and I personally new it wouldn't be long before 1 of us went and bought a sh** load of them (my money was on my brother David P!!!) 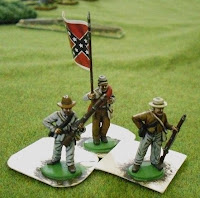 Sure enough after catching the bug with his 1st box David went out and bought the brigade pack (plus some very nice extras)
I benefited from this deal with a box and a command set for myself, Bonzer!!!