The 2nd battle saw David up against Robert (who dropped in on his way down for a paper).

So more pretty pictures of the 2 armies facing up. 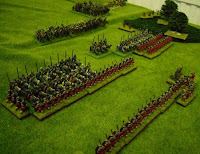 Again I have no idea who won the battle?

David's Sassanid army is pretty much all cavalry.

Some Sassanid cavalry taking on the Romans. 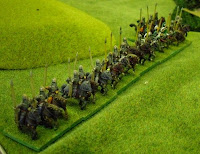 And a big hand with the DBM measuring stick. 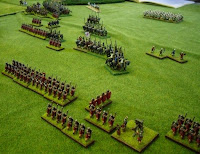 Now this picture looks as though the Romans might have cleared away a lot of the Sassanid cavalry threat? But I can't be sure?
Posted by Paulalba at 18:26