Well considering we are ment to be slowing down for the festive break we had a great turn out at the club with 7 games being played.

On the darkest cloth in the room Simon, Martin ad David P jnr finished up their 40K game early and managed to fit in a Lord of the Rings game using the newest set of rules. 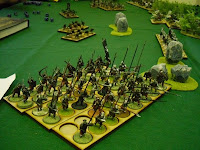 A group of bad guys advancing forward pikes in hand.

Some brothers of Rohan riding into battle and that's about it as I have know idea who won as I hadn't noticed the lads had set up for another game.
You know what I am going to say here lads, you could do with getting your movement trays finished!!!