A whole lot of Rings 1

Right as you asked for it this 1 is for you Martin so you better be reading it!!! There will be a question and answer session at the club next week so pay attention.

Well we decided to have a go at Lord of the Rings the Saturday before Easter and this is how the story went . . . Deep breath . . .

Now HOLD ON just 1 minute!
There is a real story to be told and I'm here to put the record straight and it's not the one you all know written by that J.R. what's his name? You know the guy, the one off the adverts who wrote Fly Fishing I know it was some time ago but I really should remember anyway back to my story.


The evil guys they aren't all that bad!

The Goblins and Trolls: well they naturally shy away from the light as you know because their eye sight is goosed from working for THE MAN down the pits for like forever! And besides they don't earn enough for sun block so no wonder they get pi**ed off! 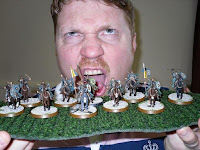 The Orc's and Uruk-hai: So they like a bit of man flesh now and again! I ask you what harm are they doing? If truth be told it keeps the streets quiet at night and there's no yobs mugging old ladies around their neighbourhoods!!!

Things were just fine in Middle Earth . . . The Hobbits were quite happy getting smashed out of their tiny skulls on ale (and mushrooms, yeah Mr T left that 1 out of the books) every evening.

And the Forces of Evil (well we call them Evil) were contented doing a bit of logging (removing some very grumpy old trees) and a bit of massed rambling (you know the German way, like back in the late 30's early 40's).

Then along come those Artsy-Fartsy Hollywood writer and director types with their sabre rattling and war mongering . . . anything to make a movie or 3 if you ask me!!!

Next thing you know and Middle Earth is knee deep in actors!!! With their cafe lattes, veggie burgers, and votes for women!!! 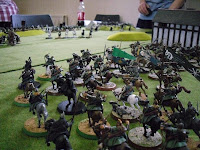 What about that Gandalf character he's got more twists and turns than a roller coaster! (grey then white what's that all about?) and have you seen the way he stares at young Peregrin Took in the last film, seriously dodgy!

And look who shows up next . . . The Rohan King - Old Geeez a Job himself! Away back to Hollywood Yosser you've become a big Jessie. We remember when you needed a job to feed yer bairns and you were the dad out of Restless Natives . . . when you were trying to prick a wart in yer boys finger whey A Big Needle See!!!
to be continued

Please note: The writer of this blog suffers from a severe lack of sleep, some may call him a comedy genius up there with the likes of Andy Koffman, Les Denis and Benny from Crossroads but others will say he talks a "Bag of Sh**e" Only you can decide! I know a lot of my references are pretty far out there but if you get at least 1 of them you should feel good that your brain hasn't totally turned to mush yet!!!
Posted by Paulalba at 14:49