So it's official . . .
The painting of our big old ACW's has begun!

I do believe David P is now sold on the idea of Army Painter!!!

This lot of Rebs are from David's collection. 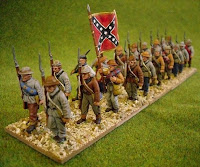 What can I say? they look outstanding! 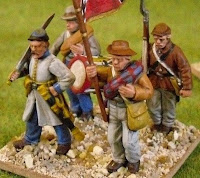 And all painted in a few days.

We had talked about trying The Army Painter out for a few months after Chris let us in on the not so well kept secret that had swept the wargaming nation! 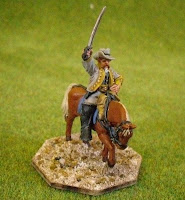 David had never tried 28mm historical figures up until a couple of weeks ago and now he is planning on buying Napoleonics!!!

And these are my Berdan's with just the armypainter brushed on and a spray varnish.

I think I'll give them a little highlight after all since it turned out so well on David's Rebs then a little matt varnish and I'm done. To be honest they are fine for the gaming table now

And what about you JP are you sold on the Army Painter yet?

Nah! cause you paint like a Kalashnikov anyway (that's why we've had to turn to extreme measures just to keep up!!!)

You've done a great job on these guys JP.

However I do see 1 major problem!

Your going to need a bigger baking tray!!!
note: for the people outwith the club JP's other hobby is knocking merry hell out of old baking trays to terrify the neighbours! He does put them to good use thought.
Posted by Paulalba at 12:50