Some pics this time of the lads revitalised interest in 40K just after they finished off a Lord of the Rings game. 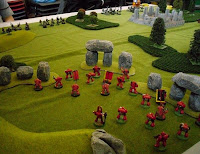 2 games in the 1 day I hear you say! Yes we were impressed too!!

Since I was just sitting around I took the chance to get a couple of pics of young Charles troops.

There was a good turnout of the younger lads this week. Just like buses you don't see any of them for ages then 5 come along at once! Though probably not a Scottish bus service unless you live in a city!!!

Some of the Imperial troops from young Charles collection (nice . . .)

And some from young David's collection (also nice . . .) 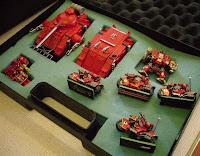 And the Blood Angels hardware. 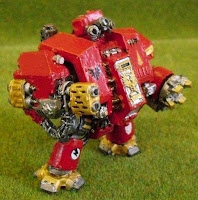 This dude would be perfect for smashing windows. A whole lot of metal in this casting!!!

Some Star Wars vehicles too . . . No? Are you sure? It sure looks like an upgraded scout walker?

I'm just getting old I guess.