With the club still awaiting the completion of our new gaming centre (Carluke Community Centre) the wargaming has been pretty dead of late and thankfully JP stepped into the void offering a venue this Saturday for a little game of DBM.

The face off : The Celtic tribes (JP and myself) had grown pretty tired of the Romans and their Allies (David and David Jnr) taking wer land, sheep (n wimen) and we decided that it was aboot time we kicked their sorry behinds back to sunny Rome!! Apologies right off for the picture quality through this 1, I know the old line about workmen blaming tools etc but the light was supplied by a tiny window and there were shadows galore! 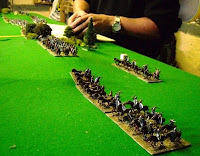 This was my little section out on the left of the Celtic line a small force on foot (but obviously the best on the field!) and a few units of cavalry and chariots.

Facing me was a force of turn coat natives mounted up and pretty keen to do battle having their Roman chums with them. 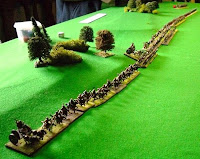 The Romans and their Allies stretched right along the length of the table and looked to be quite a formidable force.

Their skirmishes deployed out front hoping to break up the massed army facing them.

A wee close up of some of the Roman legion with the sun at their backs. All the Romans were from David and young Davids growing collection.

A view from the Roman encampment as the large Celtic force emerging from the forest.

Quite a number of Celts facing the Romans!

All the Allied army was from the collection of JP and very nice they were too. 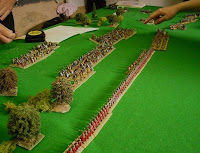 The sabre rattling begins and the Romans start to push forward to see if they can put the Celts to flight.

I really like the look of the DBM armies and they look the part on the table.

The brave heart antics start to go into full flow from the Celtic lines. 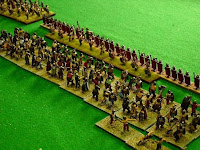 And that was it the Romans decided enough was enough and went for it and the Celts seeing that they outnumbered the enemy by a fair bit got stuck in too.

The Celtic cavalry were soon in the thick of things too plunging headlong into the Roman heavies. Pretty soon they were pushing each other back and forwards at their end of the table and this went on for most of the game. However this section of the battlefield quickly became a bit of a sideshow compared to the goings on elsewhere.
. . . to be continued
Posted by Paulalba at 12:38