So that was that, a good days gaming in JP's garage. The Davids and myself have had a little go at DBA but this was our 1st time out with DBM and it seemed to run really smoothly and was a lot of fun. Not to complicated and pretty fast playing.
(I thought it would be nice to finish off with some closeups of the troops we were using. Big thanks to JP for the hospitality!) 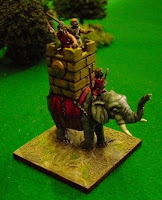 David finished this elephant for his Roman army (I believe the Romans can attach 1 elephant to their army?) and thankfully didn't use it on the day as it might have caused my cavalry on the left a bit of a handful.
The normal troops look excellent but it's the special items like elephants and artillery that really add to the look of a 15mm army. David has been busy converting figures by moving arms and heads to give some variety to his units. The 2 guys on the top of this elephant are the same figure with one given a bald head!

Some more of Davids troops again with the commanders chariot in the background. 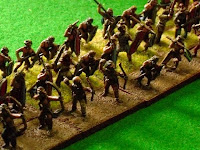 Loads of interesting poses in this bunch. 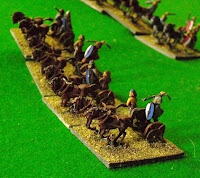 Some of my glorious charioteers kindly supplied by JP for the day.

Some of young David's Roman force. Heavy cavalry from Warrior Miniatures in Glasgow. They do a great deal on their army packs. 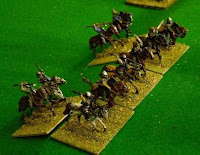 More from JP's large Celtic collection this time some of his cavalry. "You were talking of re-basing your army John and no doubt you can have these guys all re-based within the week but why not just start another army! go on you know you want to!!" All of these figures and more will be appearing soon at a community centre near you (if you live near Carluke that is) so if you fancy a game give us a shout!
Posted by Paulalba at 13:07