. . . Continued As this was just a day for learning the rules we just fielded what we had available and decided not to stick firmly to the rules on how many casualties you had to inflict to win the game so basically it was a fight to the death, last man standing sort of thing. It has to be said that David and young David were well outnumbered in most areas.

So right along the field it all kicked off and for a time it seemed to be pretty even with the Romans as expected gaining the upper hand in their sector.

However after a time the Celts Superior numbers began to show. Added to that the war band rule resulting on kills even on push backs against certain types of troops and the Romans began to crack. 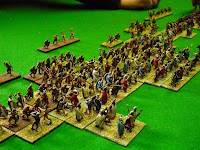 The Romans Allies to their immediate left weren't doing much better either and the enemy centre began to crumble.

A close up shot of the fighting in the centre: Really nice looking armies fielded by both David and JP, very colourful and a great inspiration.

It was brother against brother at my end of the table (literally) and my foot looked to have the upper hand numerically but they were up against a mixed bag of chariot, cavalry and foot.

With some pretty jammy dice from myself and low dice from David the enemy force slowly began to break up. 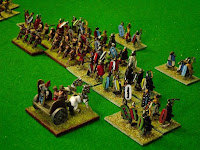 Soon only the commander and a few hardened troops were all that remained against my gallant Celtic warriors. 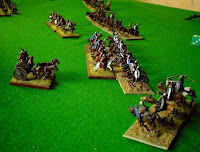 Out on the left looked to be a more difficult task for the Celts.

Again the dice gods were against the enemy and their troops began to disappear in droves. Back in the centre the Romans looked to be done for too. The Allies had won the day!

So that was that, before you could say Boudicca's your auntie the Romans had their flights booked on easy jet and they were off home to sit around in the sun sipping fine wine with classy ladies in designer clothes. While we got back to tending to our sheep, going down the local at the weekend, getting drunk and fighting amongst ourselves.
And that's the way we like it!
Posted by Paulalba at 13:02