I've been pretty distracted with life and work of late but I managed to make my way down to the club to see what was on the go this Saturday.

It appears I have been missing out big time as there have been some spectacular battles on the go (last week the Riders of Rohan were up against 2 elephants!!!).

This week all the guys got together and done a beautiful looking 10mm WW2 game.

Four tables were used filling a third of the room.
JP's US Army pictured left

Jon B prepared the excellent looking terrain for Italy in WW2.

There were six players on the day.

JP's recon and armour advancing through a wooded area just outside the town. 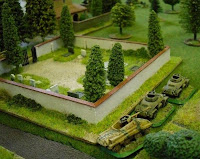 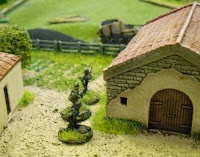 A German section checking out some buildings. 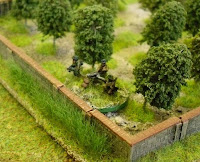 And a German heavy machine gun team sitting in ambush.
Some closeups of the 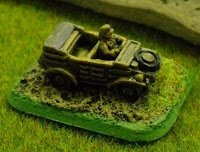 How cute is this? A 10mm Kubelwagon, sweet!

And a Panzer IV from John M's collection.

A PAK and transport ready to shoot the Sh** out of some unfortunate Allied armour.

The Germans for the day were John M, young Stephen and David P snr.

Some artillery starting to pick off the Allied armour. 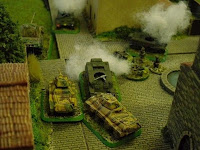 A blood bath in the centre of town as the Allies advance guard run head long into heavy German resistance. 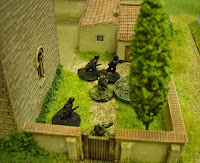 Some more Germans making their way through a build up area. is that a couple of ninjas too?

More of John M's Armour waiting to come into the battle.
Posted by Paulalba at 01:47