A few pictures David P Snr took of a large battle of Lord of the Rings a few weeks ago when I was elsewhere. You can see 1 of David's five (5) mumaks on the rampage! 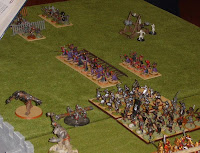 The lads have moved on to the Return of the King rules (correct me if I'm wrong?) for their Lord of the Rings battles so the troops now need movement trays and hopefully the lads will get some sand and paint on the soon!

All the terrain is from David P Jnr and snrs collection built by David P snr
Posted by Paulalba at 08:52