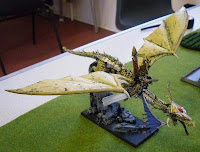 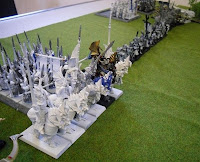 Stephen had his High Elves on the field

And he reassures me that they are now starting to be painted! 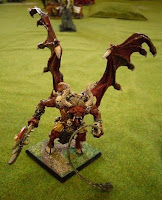 The Dark Lord Stuart had his fiery Demons out for more blood fresh from riping JP's Orcs and sods apart a few weeks back.

and also pictured left the other (globin)

Hemoglobin, blood brothers, do you get it? Ahhh comedy, my talents are wasted.

Some of the Dark Lords hounds of hell.

with another picture from their family album. 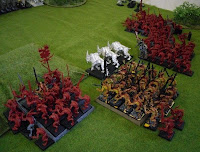 Anyway I don't have much time to spend on stories at the moment so basically the big man moved his evil force forward to confront the young lads good guys.

And really terrifying they looked too. They will look even more terrifying when they are actually finished!

The good guys dragon tried to catch some of the baddies in the open . . . more fickting . . .

And there was a big showdown with the evil twins getting the better of the forces of light.