We had another low turnout this Saturday (6 and 1 visitor) and it led to a fair bit of discussion about the club's future. The past few weeks attendance has crashed at times falling short of the 6 people needed to break even. It's true we are a small club in an isolated area and we are a very diverse group.

The younger lads eventually start to drift away into other activities as wargaming becomes uncool and us older guys have frustrating job patterns as well as family responsibilities. We are all in the same boat and also we all get different things out of the club some will drive miles to get their gaming fix and me I suppose I like to see my freshly painted men moving about the table while sharing a laugh with like minded folk. We are also struck with the same problems smaller football teams are (We have Hamilton, Motherwell, Airdrie and Albion Rovers all within a short drive of each other with quite small attendance yet because of history they will not join together and we have Motherwell Wargaming close by with a small turnout).

I started this blog to hopefully help keep the interest amongst our guys and make us aware what each other had planned but we have not been the best at arranging games with a lot of it last minute stuff. A few times people have turned up with armies hoping for a game and they were disappointed (A big apology to Von Hannah who went and got an army looked out last week and almost know one was available). Anyway, the next couple of months I'll keep posting and emailing everyone and hopefully our numbers will pick up and if not as the guys were saying it might be back to garages and lofts. A big thank you to the guys who have come along from other clubs over the past year not only giving us some excellent games but have helped the club keep going. 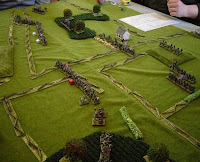 Anyway enough of the serious stuff: We had another ACW game on the go with JP, Billy S, young Thomas and myself, Billy was a late arrival (travelling up from Glasgow, a real wargaming trooper!) and he took over the Rebs left.

Thomas was on the Union right

And JP was on the Union left 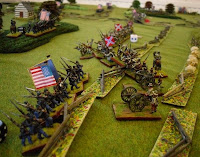 It was a confusin old day for myself. Last time I played was GdB naps and you struggle to get flank fire on the enemy and JReb II is the complete opposite. 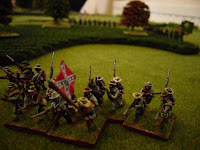 So I put a cunning plan into operation (I thought it was a great idea) and I opened up a slight flank and lost a gun. My unit was untouched otherwise however I was advises to disengage and fall back to regroup. Despite JP's criticism it proved to be the right move. I'm lost with ACW at the moment as everyone has a different idea of what you should do, 1 player might think your idea is nuts while the other agrees, you would have to be a mind reader and your units are so fragile. It's fair to say my head was pickled on Saturday (and not from the bottled of Red wine my wife and I shared the night before!).

Meanwhile Thomas's unit began to break up and Billy S went on the offensive.

I set out my new line of defence.

JP cautiously moved forward towards me. 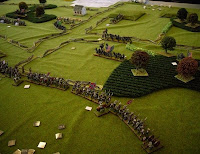 While at the same time his right flank began to totally disappear and decided the only option left was to retire. I managed to take a good number of casualties off his forward unit before they moved out of range. 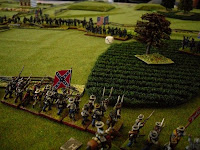 A victory for the Rebels was declared.

And JP accepted defeat graciously.
Posted by Paulalba at 16:09