Rebel in the Room 1

So here we are in a new year at the club (a belated Happy New Year to all) and it's been a slow start with the mountains of snow everywhere and real life commitments taking precedent but the numbers are starting to pick up again.

American Civil War has been the poison of choice from our last meeting before the Christmas break (with 8 of us in a big shoot out) right through to last Saturday.

The pictures this time are from the big game pre Christmas that I should have had posted long ago but to be honest I couldn't be arsed due to too much work.

So I thought I'd start off with some closeups of the troops on display. The 1st 3 pictures are from David P's collection of Yankees and Rebels.

Some rebels from Billy S a very welcome new arrival at the CWClub, a seasoned wargamer who has been helping some of the less experienced ACW players (namely me) get the hang of the Johnny Reb rules. 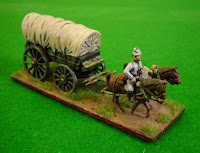 Another piece of eye candy from David P's collection.

And some more shots of Billy's Rebel army. 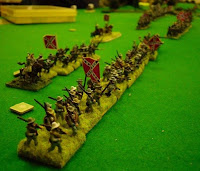 One thing interesting about wargaming is how everyone has their own style of painting and basing figures and the more people you meet at the club the more ideas you get for yourself.

And a little bit more eye candy for the table.

And to finish off some more of David P's Rebs. JP and David C also had really nice figures with them that will be seen in the main blog but unfortunately I was (again) just off nightshift and despite taking loads of pics most were junk and had to be trashed.

So in total we have played 3 ACW games in the past few weeks with some of us playing a couple more and next Saturday we are going to go for it again. I must say I have enjoyed the little buzz we've had around the club for ACW at the moment but it hasn't stopped me getting humped most of the time. Last Saturday was the worst of all (big apologies to my partner in crime Robert T) who thankfully wasn't paying for his petrol on the day! However it has to be said I am just learning and the Johnny Reb rules are a cruel mistress that don't leave much margin for error. If you mess up in any way it's "Goodnight Vienna" (added to that my dice seem terrified when the big lads in the room, must be all those negative waves dude :-)

One last note: If you like what you see and read guys hows about signing in to follow your club blog and leave your own comments on how you think the games went. I know some of you are Technophobes so if you need a hand setting it up send me a letter in the post.
Posted by Paulalba at 03:05