Rebel in the Room 2

Some pictures showing the setup for our big game just before Christmas. A very rusty affair with a couple of the guys coming out of ACW retirement and a few new boys to the Johnny Reb II rules too, eight of us braved the snowy weather (2 of us making it along after Christmas nights out!) not a bad turn out for the last Saturday before Christmas.

JP setting up for us as usual, the only man I know who carries an old snooker table baize in the boot of his car and a box of chalk in his back pocket while out shopping just in case he bumps into a fellow wargamer! 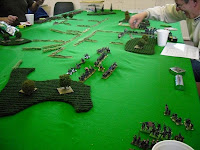 Down to the game in hand
The Union Army: David C had our left flank covered with JP in the centre 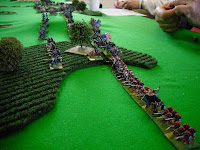 A closeup of David C's Zouaves.

I was on the right of centre in a pretty exposed position awaiting the arrival of Jon B who had sent a telegram (text actually, that he had just left the house, cockney rhyming slang for he had actually just rolled out of bed and was about to tuck into some sausage, bacon and egg butties before jumping in the shower!) The main thing was he was going to make it!! 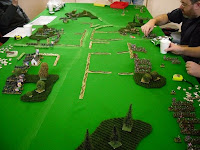 The Confederates : basically set up in a big line right across from us. This was going to be a stand up fight just like our first games of Naps before we discovered tactics.

David P's troops on the far left of the Rebel lines.

On the left of centre was General Zebadiah Billy Bob Livingstone "Zebedee" to his friends! (we will hear more about his magical exploits in the following reports of the battle). To the right of centre was John M an experienced ACW player in 10mm. John M and Jon B do most of their wargaming in 10mm so we had to familiarize the guys with the larger 15mm figures (kind of like Father Ted explaining to Father Dougal about the toy cows being small and the ones in the field being Farrrr Awwway) but the guys are fast learners and the size issue didn't cause to many problems.

Finally on the far right of the rebel line was Billy S the most experienced ACW play of us all, a veteran of many a campaign coming out of retirement to help the South in their momentous struggle for Independence.